Project themes: Social housing for 15 residential units with varied users and mix aggregation groups, the relationship with the buildings block, the concept of pubic square intended for different and collective uses in relation to the time of the day and to specific needs, the accesses to the structure and its position above the square level, the structural system of the building, the finishes of the façade and its openings, the roof becoming a continuation of the façade, the design of an eco-sustainable building.

A town + a communal space + the court of a house
The project started from a plot included in a built block, characterised by the peripheral position of its empty spaces. The project made the most of the opportunity presented at competition stage by proposing a central urban space that integrates the existing gaps and extends the concept of an urban multi-functional network.
The quarter where the project is inserted was perceived as a reality in continuous evolution resulting from public spaces specific needs.
The existing directrices, roads, small squares and public spaces, were carefully analysed.
The urban context, the design process and, last but not least, the building regulations, were not intended as bare limits to the drawing. On the contrary these represented the core of an integrated design. The restraints indicated in the competition brief became parameters of the design assignment. 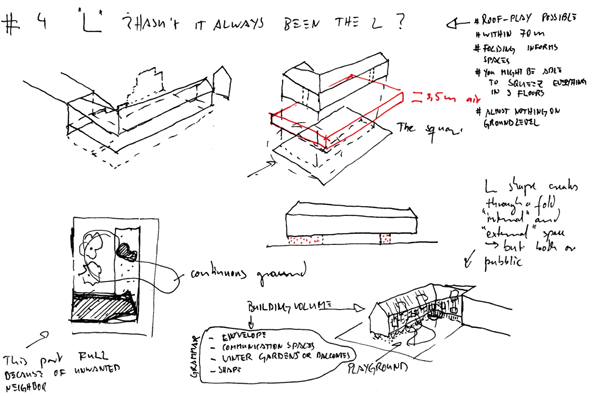 An inclined square + a floating building unit
The space between Hof weg, Lager weg and Central weg is enhanced by the presence a surface offering a public, pedestrian and continuous square. This area adapts to the site specific requirements, smoothing the different levels within the context.
The central zone of the square, relies on the idea of a space shared between different mobility models: pedestrians, cyclists, cars, all articulated around a central road system.
Proceeding in the western direction the zone gently slopes towards the Hof wages property, reaching the finished pavement level located one and a half metres below the zero level of the surrounding roads.
This linking operation makes the project permeable at ground level where the square becomes the connection element. Different levels define the different uses of the square.
The residential building is at a higher level overlooking the square and completes the frontal view along with its adjacent buildings. Entries at ground level become crossings and make the project permeable. 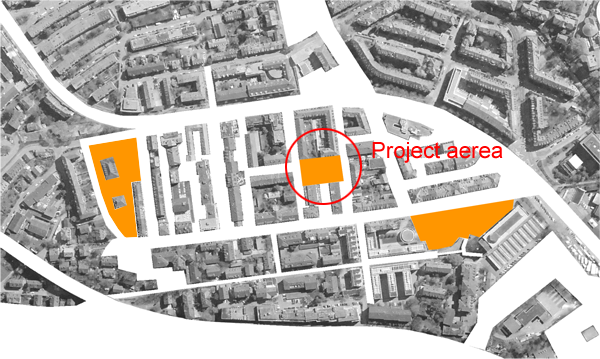 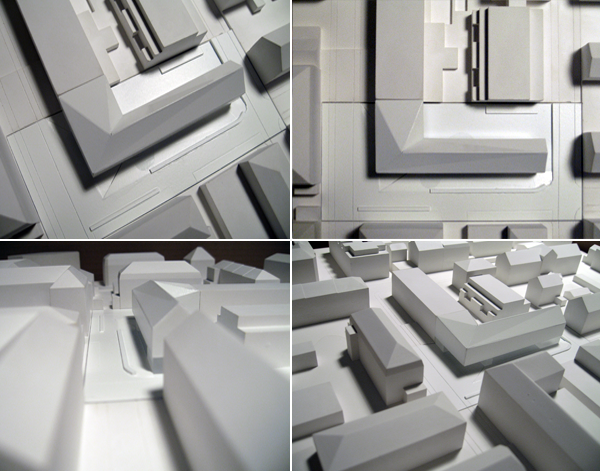 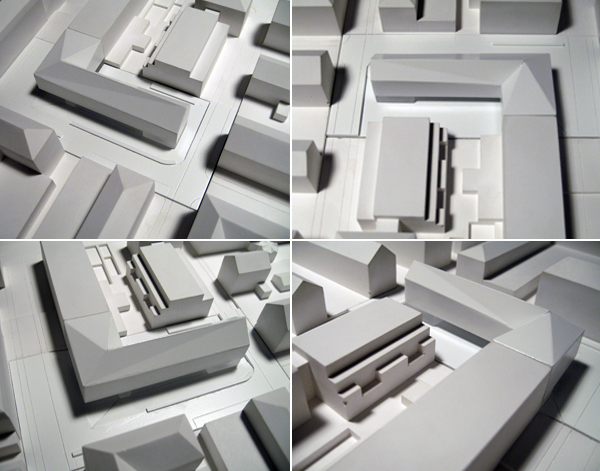 An inclined plane at roof level + one transformation
On the south side of the area, the building is attached to the Lager weg unit, completing it. The construction bends at the intersection between Lager weg and Central weg.
The resulting building mediates between the existing constructions by creating a new space concept with views open to the context.
The designed roof starts as a horizontal plane and ends on the opposite side with fronts opened to the square below, as a gable roof. It is in a strict relationship with the context where the existing built fronts are characterised by sloping roofs.
The building is composed of three residential floors, the top one being an attic enclosed by the roof, and an upper loft destined to common storage.
The variation of the roof structure is underlined by the development of the gutter line, that follows the whole path described by the upper perimeter.
Since the volume of the building is above the square, the areas below become access points leading upwards as well as storage areas for flats’ use. This creates different permeability levels of the public spaces ranging from an open space towards the street to a covered space and, finally, to an area enclosed by the internal court. This results in zones with different privacy levels: from the public space along the street to the semi-public and semi-private filter surface, to the private court. The filter provided by the covered zones recalls the commercial areas that characterise the historical centre in Berna, with colonnades used as protection against bad weather conditions and in particular from rain and snow. When required the roof filter zone can be enclosed and used both for public and private events.
The resulting space is seen as a communal resource, catalysing public life between the adjacent buildings. The public surface will be able to satisfy the needs of users form different ages and groups having the possibility of creating areas for children playgrounds, zones where elder people can meet up and an outdoors cinema in the area enclosed by the court. 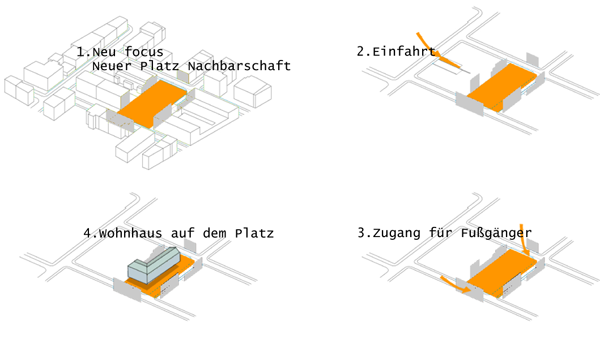 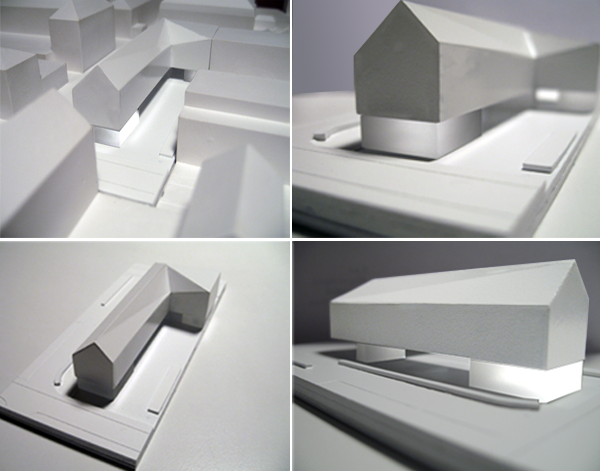 A place + a colonnade and a court with public vocation
The public space within the project, with its three permeability levels, is available for collective social activities, with different uses planned at different times.
The project, characterised by the use of specific materials such as coloured asphalt as well as the predisposition of seats, leads to idea of living as a central concept, in relation to the possibilities offered by general aggregative elements. 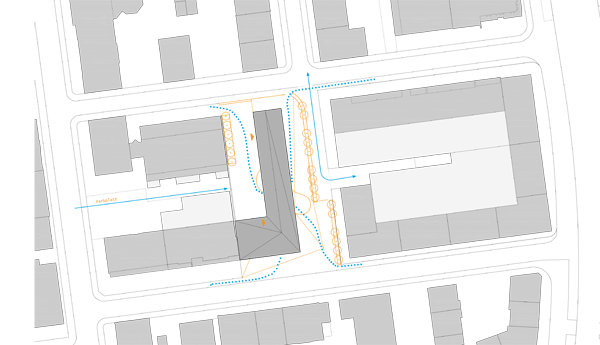 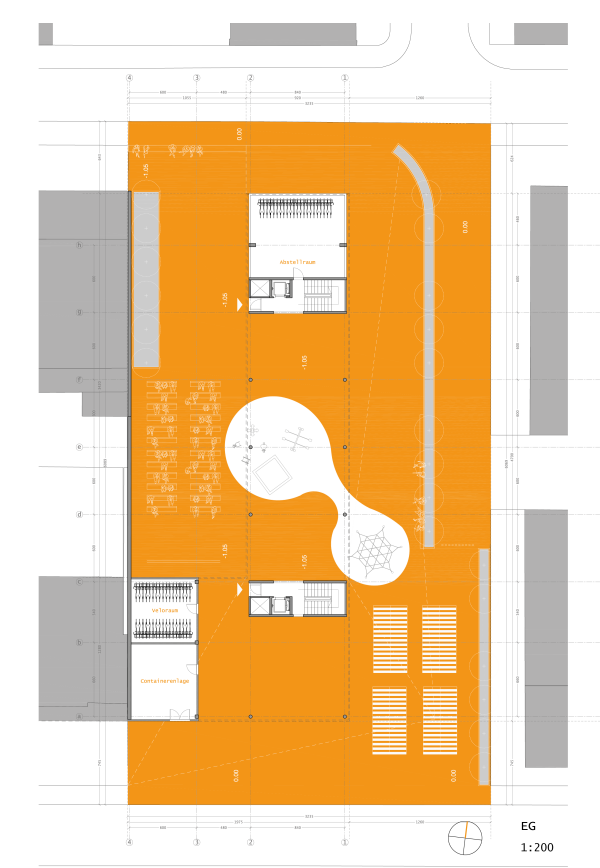 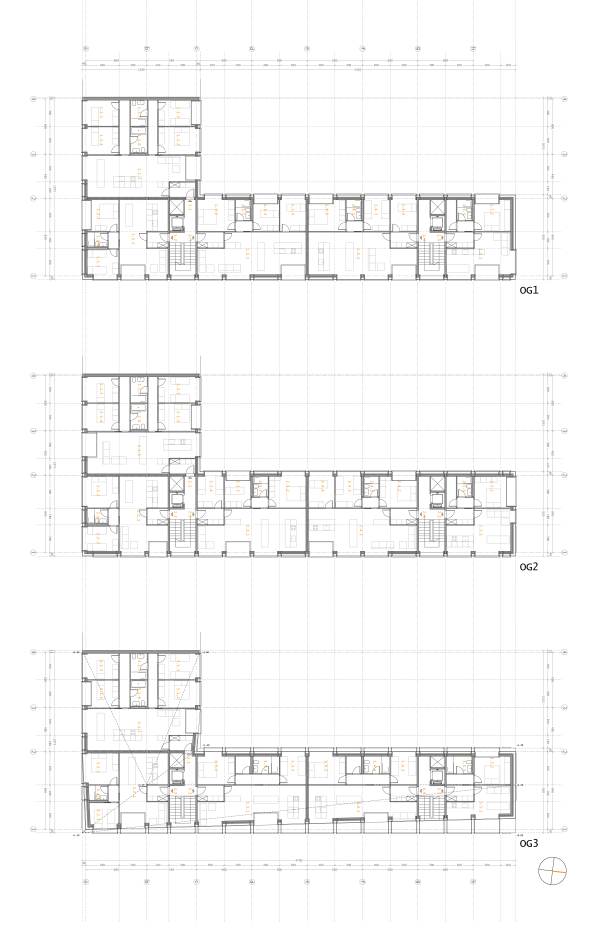 A modular skeleton + a skin
The building structure is composed of simple metal elements covered by two connecting units leading upwards. These connect the flats directly to the public open space. They also link the below ground areas with a common laundry, a bunker, required by the building code, and a covered car park.
The whole building is accessible to disabled. The plan typology is simple and flexible. When required different flats can be joined, also in relation to modified family conditions over time.
All flats are provided with two windows. Each flat has a balcony that, on request, can be transformed into winter garden.
All flats, with the exception of the three ones located along the corners, are provided with a view on the street and a picture window on the court.
The whole building is enclosed by a continuous roof screen.
Its bent surface ensures continuity between the facade and the roof surfaces.
This vertical continuity, based on a game that develops the ridge and gutter lines of the roof, reveals the structure’s formal uniformity.
The architectural shape of the building with it continuous external finish, is pierced solely by the shape of the windows and by the lodges’ openings.
The façade is composed by a thermal package with a single cavity, made out of masonry, insulation, air and a technical skin as external cover. This technical package satisfies the requisites from Minergie – P ECO, and can be easily maintained. 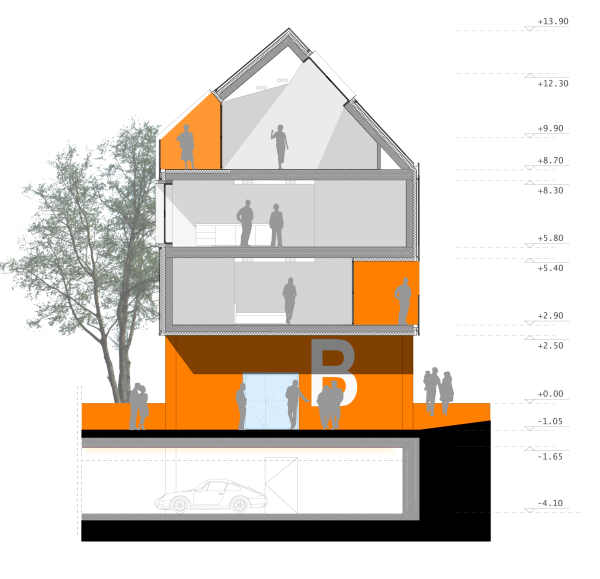 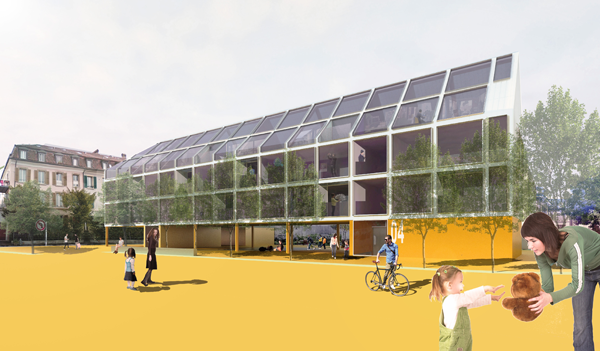 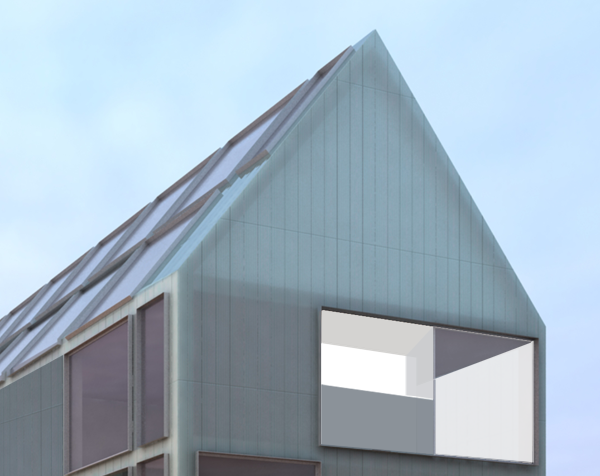